Courier take-way food delivery service Uber Eats is to expand its business in Portugal by bolstering its operations in the Algarve.

The service has already been available in the Algarve since April – namely in Faro, Olhão, Loulé and Quarteira -, but this week its motorbike delivery service is now serving other towns and locations including Portimão, Lagos and Albufeira in a national 24 city reach.
The company has announced it will provide services to Olhos de Água, São Sebastião, Santa Maria e Luz, Ferragudo and Alvor.
Uber Eats thereby expects to be able to fill in gaps in its service coverage in the south of Portugal, drawing on what it terms the “shared economy” of the Algarve region, a region that has a largely seasonal economy driven by large tourist numbers.
The objective is that all deliveries should be completed in less than 30 minutes. Last week Uber launched its Uber Eats service in Guimarães. According to the company, the application now covers 35% of the population by using a marketplace business model: meals are prepared by its network of partner restaurants while the couriers operate on a freelance regime.
The app users are charged a €2.90 delivery commission which reverts to the Uber Eats platform.
“Uber Eats already has a network of 2,000 restaurants in Portugal, up from the 90 partner restaurants it started with when launched in Lisbon in 2017,” states the company in a communiqué.
Uber Eats also has an exclusive delivery service agreement in Portugal with the fast-food restaurant chain McDonald’s. 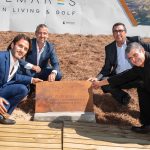 Kronos Homes invests €250 million in Lagos ‘ocean and golf’ resortNews
This website uses cookies for a better browsing experience, in continuing browsing you're accepting their use. Read More