A Strategic Plan for the Administration of the Port of Sines for 2020-2025 was unveiled today (Wednesday 30 September).

The presentation took place in the presence of the Portuguese Minister of Infrastructure, Pedro Nuno Santos in the district of Setúbal.
“The strategic options for the next few years for Portugal’s largest national port in terms of container cargo shipments rests on three strategic and fundamental pillars which aim to strengthen the role of the Port of Sines in International shipping, within a market that is ever more competitive and must take into account the challenges of digitalisation and decarbonisation,” states the Port of Sines Administration (APS).
The port has aroused significant interest from potential investors both in the United States and China, the latter seeing it as an essential component in its One Belt One Road policy to create a vast digital and physical infrastructure highway network across the world in its bid to become the Nº1 economic superpower in the world.
The strategic plan was ordered by the APS (Administration of the Ports of Sines and Algarve) from the Catholic University in Porto and was coordinated by university professor Álvaro Nascimento.
The projects for the strategic expansion of the Port of Sines was embroiled in controversy recently following an interview on the 26 September with the US Ambassador to Portugal, George E. Glass to the weekend paper Expresso.
In the interview Ambassador Glass put pressure on the Portuguese authorities to opt for US investments rather than Chinese investments, a position which drew firm opposition from the President of the Republic, Marcelo Rebelo de Sousa and the Minister of Foreign Affairs, Augusto Santos Silva.
The Port of Sines has attracted the attention of both Chinese and US investors regarding also the concession to build the GPL terminals – Liquid Propane and Green Hydrogen to power ships.
There is also a project with a concession for a new container terminal at the Port of Sines, a contract for which has already attracted the interest of various Chinese conglomerations who see Sines as a Lynch pin in China’s New Silk Route plan.
But there are other Chinese business interests in question that worry the United States. Chief among them is the Government auction for the 5G project which the Americans do not want to go to Huawei, which although a private Chinese telecommunications company, has strong links to the Chinese Government and military complex
Then there is the entry of the Chinese construction giant China Communications Construction Company as a shareholder in the Portuguese multinational construction firm Mota-Engil as well as the failed attempt by the Chinese energy company China Three Gorges to obtain a larger stakeholding in Portugal’s electrical energy giant EDP and now the contract to build and manage the new container terminal at Sines. 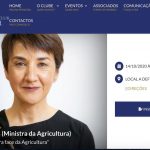 Minister of Agriculture at ICPTEvents, News 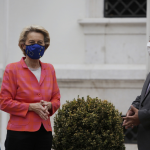 Portugal will draw on EU’s €15.3Bn in recovery planDiplomacy, Economy, Investment, News
This website uses cookies for a better browsing experience, in continuing browsing you're accepting their use. Read More