UK tech and marketing entrepreneur Pip Jamieson has raised £5.5 million (€6.1 million) to develop her “no-collar” creative networking platform, The Dots. Her disruptor scaleup company which employs 31 in Shoreditch, London, is already tipped to be the next big unicorn. But should its competitor LinkedIn be worried?

Iarrive at Lisbon’s trendy new coworking space Second Home, which seems more like a hot house than an office thanks to its forest of plants, expecting to be kept waiting for an hour to meet a young woman who is as famous for her larger-than-life personality as she is for her creative new approach to online business networking.
Pip Jamieson bounds towards me with a huge grin and spontaneously hugs me, leaving me rather bewildered and pleasantly surprised.
But then Pip Jamieson is no ordinary entrepreneur. Casually dressed, the self-confessed dyslexic but mathematical wizard (she studied maths and econo­mics at Edinburgh university and got a first-class degree) admits that she doesn’t even have an IT or computer science background, just a vision and bags of ­optimism and self-confidence.
What she has done is be able to see where the jobs market is going, and how technology will remove many of the white-collar office jobs we see today, while at the same time understanding that now a whole swathe of people do not work in offices but from home or in small coworking spaces like Second Home or shared-space incubators.
Pip also recognises that more and more people are choosing to freelance and actually desire to work flexible hours, and that this trend will continue.
“I looked around me and at the ­people I have worked with in the past and noticed that not everybody wears a dark suit and tie or a two-piece suit. I then looked at LinkedIn and saw that entire groups of people just don’t fit in there. The computer programmers, the journalists, the creative workers, the marketeers and artists…” she says.
It was then that her innovative idea for The Dots came together. In short, The Dots is a diverse community of “no-collar” professionals, including creators, entrepreneurs and freelancers. It is best described as “LinkedIn for creatives”.
Founded in 2014, it is a professional networking platform designed to help those creative professionals and com­panies showcase work, network, colla­borate and connect with commercial opportunities.
Pip Jamieson’s platform now has 300,000 members; 10% of the UK ­creative market and over 8,000 high-profile clients using it to hire talent including the BBC, M&C, Saatchi, Burberry, Google, Tate, Warner Music and Sony Pictures.
“I’m a completely non-tech person who started a business. I talk about this a lot because we’re not really going to be able to change things if people think you have to have a computer science degree to get into the industry,” she says.
“While I have been working in tech for nine years now – although I did not study computer science -, I stumbled upon a problem and wanted, quite naively, to fix it by building this tech ­platform. And the rest is history…”

Women and ethnic diversity in tech
Pip Jamieson says women are definitely underrepresented in the techno­logy industry and so she does a lot of work in the area of diversity because, as she says, “we all have unconscious bias, which is part of human nature”.
The Dots membership is currently 68% female, 31% BAME (Black, Asian and Minority Ethnic) and 16% LGBT, whereas LinkedIn skews the other way. This is “the perfect example of unconscious bias”, says the female tech company founder.
“We have to recognise that unconscious male bias exists and the most ­important thing when building techno­logy products is that the teams doing them are representative of society. That’s not just gender, but ethnicity, sexuality and neurodiversity, meaning dyslexia, autism, Aspergers and dyspraxia.”
Pip says that 35% of entrepreneurs are dyslexic and 40% are self-made millionnaires, so there is “something wired in our brains to make us more entrepreneurial and innovative”.
The entrepreneur informs that research shows that dyslexics have a wider peripheral vision, which means they are taking in information all the time, leading them to be more creative and innovative and “join all the dots”.
“We all unconsciously build products for ourselves, but if we have teams that represent a broader swathe of society, the products are more likely to be more inclusive,” she stresses.

A free service for individuals
The Dots is absolutely free for individuals. It doesn’t charge individual ­account holders, only companies.
“Two-thirds of our revenue is recruitment; companies paying a monthly subscription to hire through the site and that’s anyone across the full spectrum of the creative industries,” she explains, adding that Google is a client and so is London’s Tate art gallery. To date, The Dots has over 10,000 companies with one-third of revenue coming from ­advertisers.
LinkedIn, on the other hand, is 57% talent (companies paying it to hire ­creative talent) and 21% advertising. “LinkedIn was really built around the white collar, corporate America kind of work and totally breathes homoge­neity, whereas we are the complete ­opposite,” she says.
“In terms of encouraging diversity, for example, when using The Dots you can’t search for people according to ­university or school, because people shouldn’t be judged on the prestigious establishment they went to but on what they are creating. Not only this, there is a number of people now who are not going to university.
“I’ve spoken to a lot of young people aged 16-18 and they are really scared about the huge loans they would have to support. So The Dots’ client base also uses the platform to tap into a wealth of talent they might otherwise not find,” she says.

The next unicorn?
While playing down the claim she wants to destroy LinkedIn, she does admit to her company being a disruptor that will be relevant for the next generation of creative workers.
“I fully aim to become a unicorn and the next LinkedIn. LinkedIn was amazingly creative, but it was built for that generational mindset. It is time for it to be disrupted. We are a professional network for the next generation coming through now,” she says.
“It’s not going to happen overnight. If I’m going to become the next LinkedIn, it will be a longer play and the bigger challenge for me is finding investors and people who are willing to support that longer time horizon. A lot of venture capitalists and investors have funds and they have to build businesses and make money to pay back their investors. I get that. So it’s more about who has that longer-term vision that aligns with mine.”
So far, Pip’s integrity and honesty has paid off. By the end of 2017, the scaleup raised £4 million (€3.5 million) from investors like Hambro Perks (a UK growth investment firm), advertising agency gurus Sir John Hegarty and Tom Teichman (The Garage Soho London) and ­female-focused investors Angel Academe.
Pip Jamieson admits there were times, because of unconscious male bias, when she frequently faced questions on managing cash flow, which her male counterparts would never have been asked. “I was often subjected to the experience where would-be inves­tors would speak directly to my male partner, who had to inform them that he wasn’t the CEO and that they needed to talk to Pip.”
As for now, Pip Jamieson is concentrating on expanding The Dots’ notoriety and reach within the UK – “London is the biggest creative cluster in the world” – but has plans to go international.
The entrepreneur is looking at the potential of cities like Paris, New York and LA, and points to the fact that ­already 30% of The Dots’ community is living outside of the UK.

Messing around on boats
Pip Jamieson admits that her work is an all-consuming passion and says she gets her energy from her work, meeting people and building connections. However, she thinks everybody is different and people should do what works for them when it comes to striking a balance between work and leisure time.
The entrepreneur points out that fads and fashions come and go, but people need to search within to see what floats their boat and not necessarily feel compelled to do what trends dictate.
For some people it might be clubbing, for others yoga or walking. Pip, however, finds time to relax and unwind by rowing on London’s Regent’s Canal where she lives on a canal boat home, which she endearingly calls Horace. “When I get stressed, I take my frustrations out on the water by rowing up and down the canal. It calms me. I find it soothing and relaxing,” she says.
As for those who have inspired her, “I admire every woman in the generation of tech like Martha Lane Fox, the founder of doteveryone.org.uk, an independent think-tank and charity championing res­ponsible technology for a fairer future”.
Over the last two years, she notes that at tech conferences there is “a tidal wave of women coming up”. 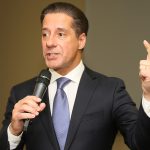 The man with the power to unlock geniusEntrepreneur
This website uses cookies for a better browsing experience, in continuing browsing you're accepting their use. Read More