The Chinese Minister of Natural Resources Lu Hao visited the Port of Sines on Friday with a large committee as part of the congress ‘Oceans Meeting 2019’ which opened on Thursday in Lisbon.

During the visit, Lu Hao was accompanied by the Minister of the Sea, Ana Paula Vitírino who showed him the blueprints of the project for the new container terminal for the Alentejo port which will be called the Terminal Vasco da Gama as well as the actual location where the new terminal will be built — south of the current Terminal XXI container terminal managed by the Singapore company PSA.
The visit is to introduce the project, how it will function and its potential as well as new investment opportunities at the Port of Sines and the important role of Portugal and Sines in the new Silk Road (Belt and Road Initiative” states a communiqué from the Port of Sines and Algarve Authority.
“There was a lot of interest for new investment at the Port of Sines but also regarding other investments in other areas up and down the country and the committee asked questions about the technical characteristics, investment and time frames,” she added.
The minister who holds the portfolio of minister for the sea and fisheries under the António Costa PS Government added, “The more competitors we can get, the greater the importance the Port of Sines will have internationally”.
An international public tender for the concession of the Vasco da Gama Terminal will be launched shortly. 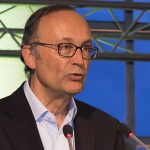