The importance of innovation in education

If Portugal does not innovate and change its outdated education model it risks being the ‘Oklahoma of Europe’ warned a Nova SBE economist on Tuesday. 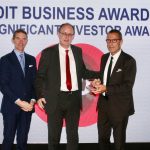 EDP given Significant Investor Award at British trade awardsRecommended
This website uses cookies for a better browsing experience, in continuing browsing you're accepting their use. Read More