How do developers in Portugal communicate their brands and projects and how are these methods likely to change in a digitally driven world was a theme discussed at a workshop held in Lisbon recently.
Organised by the Portuguese Association of Real Estate Developers and Investors (APPII), José Cardoso Botelho of VanguardProperties said although around 65% of sales were made in-house, which was a very high amount, Vanguard has taken a decision to invest in promoting its brand itself and had a number of people working exclusively in this area.
Pedro Vicente of Habitat Invest, who praised the Vice-President of the APPII, Hugo Santos Fereira for “doing so much in promoting and advancing this industry” said the Habitat Invest has been a reference in terms of branding over the years, introduced some innovations, namely in the short-term rental market in Lisbon and a clutch of five-star projects which still “reigns in this market”. The way we market our products, we will announce in 2020 a repositioning of our products on two fundamental pillars: sustainability and innovation.
Paulo Loureiro of Louvre Properties, who has been instrumental in setting up SIGIs in Portugal (REITS) said what he has seen over the past four years in Portugal said the local market in terms of marketing and promotion was dominated by what he called “Q T Culture”. “We see a lot marketing in the luxury segment with brochures and web sites which are very similar from product to product.
“I am sure if I put 10 brochures on the table or opened up 10 websites it would be difficult to associate and differentiate the product from the developer. It’s very complicated for our target audience to know who the developer is behind the development” he said.
Louvre Properties has created a specific brand for each development — it has nine luxury developments, all residential — and Loureiro admits that it is extremely difficult to see the economic impact of the latest marketing tools. “Any decision that I take based on my background in finance, I look at the top-line impact, on costs, time (if I’m wasting or gaining time), and risk,” he explained.

Is marketing working?
“It’s difficult for me to see if marketing has an impact on the sales price, will reduce my costs (I have costs if I invest in marketing). As for real estate agents/brokers, their fees are very high in Portugal. If one considers what is a fairly common ratio in Portugal you can get a GDV (Gross Development Value) of between 3-4 times on the capital which was invested” he added.
In a simple calculation he said on a €5 million investment meant a GDV of €17 million. If the project was marketed via a broker to spread the risk, you would pay 50% (€2.5 million) which “I think is a lot. The value for money isn’t here.” Therefore the developer has to look at reducing costs.
Loureiro said the tools were positive, but couldn’t quantify if the impact was tangible. “I can’t see if I should sell at a higher price or if I should make more direct sales or not, or if I’m reducing my risk. It’s very difficult.”

An abnormal market
Carlos Vasconcellos Cruz of Quantico SA said that in their experience they were approaching the end of an investment cycle that was “completely abnormal”.
This is for two reasons: first, there had been virtually no new construction for the past 15 years, what had been sold, second in terms of real estate projects, these focused on rehabilitation which was done in historic centres.
“We have introduced here in Portugal two parameters which are completely abnormal for what would normally be traditional real estate development in sectors which are typically middle class to upper-middle class or luxury and which by Portuguese living standards are stratospheric.
“We unfortunately have to take into consideration that the average monthly salary in Portugal is under €1000, so that everything we have seen to date in terms of development, marketing and communication is really expensive when you compare to the ease of sale in recent years (in the luxury segments).

Brokers – are they rip-off merchants?
“In the last few years the market has been a buyers market, and in terms of the marketers and sales people who are very professional, we have a heap of people that have nothing to do and so become developers or estate agents, don’t know the prices and expect to get that famous 5%” he said.
Vasconcellos Cruz, whose company is embarking on 1,000 phased apartments in Porto, said there was no chance this could continue to work at the moment when the two exceptions came to an end. “It’s just not worthwhile to continue to keep paying these amounts which are high in European terms.”
“We are coming to the end of an easy sale cycle and things are clearly going to change with new construction comprising apartment blocks with 500 apartments for Portuguese families and will lead to a radical change in the estate agency market”.
He also spoke about the importance of intelligent algorithms which was digital and data base driven which would be complemented with sales teams without discarding partnerships with other brokers.
“I think we will enter a period which will be much more professional, with a lot of innovation, with lots of digital technology which will clearly help both the developers and estate agents”.
Carlos Patrício of Pujol Invest agreed the market worked badly and was really expensive and that with the speed at which the market has grown developers had become almost hostages to brokers with a lot of capital wasted on estate agents by giving them 5% for the sale of seven or eight properties and was opting instead of in-house sales.
“The solution, therefore, is to make direct sales in-house and developing a portal with international contacts in markets looking for product in the Portuguese market and is already in-house subscribed to International platforms.
“Our so-called exclusive brokers appear with other brokers to share commission, sometimes as many as three brokers for the same product and I think we’ve ended up being victims of this system” concluded Patrício.

The Take Home
All of the guest speakers agreed that the future of real estate marketing would be heavily influenced by digital technology used on platforms designed with the consumer in mind, particularly since developers feel that the 5% commission charged by brokers on the sale of their projects is to high as well as by co-exclusive estate agents and brokers which they believe will be obsolete within a few years.

José Cardoso Botelho, Executive Managing Director VANGUARD PROPERTIES
Vanguard Properties is one of Portugal’s largest real estate residential developers. Incorporated in 2017, the brand is the result of a European Family Office run by Claude Berda with a Portuguese partner, José Cardoso Botelho – combining a strong financial capacity with in-depth knowledge of the local market. Its projects include Comporta, ‘A’ Tower, Infinity, Muda Reserve and Alto do Rio among many others in Lisbon and Portugal.

Pedro Vicente, Administrador HABITAT INVEST
Habitat Invest has several successful projects in Lisbon such as Alcântara Lofts which was 73% sold to Portuguese, launched the sale of five projects at the Portugal Property Fair worth €165 million, as well as a project aimed at the middle classes called Valrio which has also been mostly snapped up by the Portuguese. Next year it will launch the 165-unit Park West in Ameixoeira, Lisbon. Focusing on new build, other projects include Páteo de Salema, Rossio, Lisbon, Duque 70, Marquês de Abrantes 115, both in Lisbon, Estoril Condominium in Estoril and Marinha Prime, Cascais.

Carlos Vasconcellos Cruz, Executive Chairman QUANTICO SA
Since its creation in 2013, Quantico SA has invested over €100 million in urban rehabilitation projects in Lisbon, Cascais and Porto. In 2017, it created a joint venture with Albatross Capital and both companies created an Investment Fund called Albatross Iberian Renovation Fund I, an investment vehicle based in Luxembourg focused on the premium urban renovation segment in Portugal.

Paulo Loureiro, CEO LOUVRE PROPERTIES
Louvre Properties is a real estate developer based in Lisbon which focuses on the acquisition, development and management of residential and commercial projects in Portugal, particularly in the urban rehabilitation area. It has 9 projects in Lisbon, 145 apartments and 35,000 m2 in construction and has invested €100 million. Projects include Alexandre Herculano 41, Rosa Araújo 12, The Nest (Rodrigo Fonseca 11), SCENIC Lisbon (Rua Gomes Freire 18 with new projects in the pipeline for Campo de Ourique and Graça (Lisbon), Cascais and Porto. 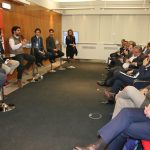 Proptechs in Portugal – how can they support property development and investment?Recommended

DreamShaper – turning dreams into startupsNews, Recommended
This website uses cookies for a better browsing experience, in continuing browsing you're accepting their use. Read More