The Portuguese pharmaceutical group Raul Vieira says it has an optimistic plan to double sales in 2021.

In an interview with the Lusa news agency, its CEO Maria de Macedo admits that 2020 has been a stagnant year so far this year “which has not been good because of Covid-19 and the inability to make visits to doctors and pharmacies to market medicines”.
At the end of 2019, the company had completed an investment round in preparation for marketing a new drug. “When we began that the pandemic hit. We could no longer visit pharmacies and doctors. Appointments stopped and we also suffered a fall in sales,” she said.
Now, the CEO says that contacts are “slowly returning” and the group is focusing on natural-based medicines and bio regulators, safe, gentle, side-effect free medicines which have yet to be fully taken advantage of in Portugal.
“With a very well trained team we can win market share, we have a small team and lots of room to grow even if the market does shrink by 50%,” says Maria de Macedo.
Last year, the group which employs 25, saw a €1.7 million turnover and retained all staff in training without lay-off during quarantine.
The company, which mostly represents German laboratories, has suffered a fall in business of 17% but hopes to achieve the same turnover it had in 2019 since sales last year were low.
“We have an optimistic plan to double sales next year. We’ve got new medicines that will be approved and there’s no reason why our share can’t increase” said Maria Macedo who said that 2019 had not been better because the of restructuring of laboratories.
The 100% Portuguese company which was founded in 1920 by Júlio de Macedo, is today run by two of his four great granddaughters. 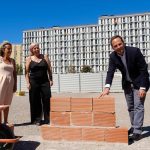 Work begins on affordable Lisbon housing projectNews, Property
This website uses cookies for a better browsing experience, in continuing browsing you're accepting their use. Read More