Portugal Telecom, known today as Altice Portugal, and including its brand MEO, is expected to go on the market for €6.5Bn.

A French bank is said to have been instructed by Altice to send out information about the sale to potential interested parties which would likely be private equity funds.
The investment bank involved is Lazard whose task is to find a buyer for the Portuguese part of the large multinational telecommunications company. The asking price for the former Portugal Telecom is said to be in the range of €6-€6.5Bn according to a source at one of the funds which received a prospectus about the sale.
It means that while Altice Portugal has not issued an official statement to the media, its parent company is either looking to offload the asset or testing the water to see the level of interest on the international market.
If it were sold. It would only likely be to private equity firms because competing since there is unlikely to be any great interest from other telecommunications companies operating in the national or International market.
It is said that Orange, MásMóvil and several funds could be in the running for Altice Portugal according to the weekly newspaper Expresso.
On the issue of the 5G auction, Altice Portugal stated this week that it was “astonished” by the decision taken by regulator Anacom to approve a change in the regulations governing the 5G auction currently underway.
Altice Portugal which is led by Alexandre Fonseca “does not understand what the competent authorities are waiting for” regarding “changing the management of Anacom”.
Altice Portugal is calling for the removal of Anacom president João Cadete Matos from his theoretically fixed position and has already called for his dismissal in the past.
This is because on Monday Anacom approved a project to change the regulations governing the 5G auction against the will of the main operators in Portugal – Altice, NOS and Vodafone – with just days to go before the main auction for the sale of frequencies starts.
The change in the regulations will speed up the pace of the auctions, enabling 12 rounds per day compared to the current seven. (it had been six at the start)
This was because the pace of Anacom’s auction has been so slow that the regulator was forced to change the rules to enable more bidding rounds per day.
Wednesday (2 June) marked the 100th day of bidding in the auction, in which the mobile operators are competing for airwaves across multiple bands: 700 MHz, 900 MHz, 2.1 GHz, 2.6 GHz and 3.6 GHz. The pace has been so slow that Anacom increased the number of daily rounds.
Competing companies have been increasing their bids by very low increments (around 1%) much of the time — despite the fact that the rules allow them to go up by much bigger amounts, the regulator complained.
Anacom complained in a statement this week that the auction has been “particularly slow,” it said and added that there
is a “serious risk”, if the pattern of bids observed so far is maintained, that the auction will last for a period much longer than initially anticipated (and much longer than the normal duration of these procedures in the vast majority of states of the European Union)”
“This could result in a disastrous delay in the development and launch of 5G networks,” it added.
Anacom will now undertake a public consultation before bringing the new regulation into effect.
By Monday, there had been 580 rounds of bidding but it is not even sure if by increasing the amount of rounds per day the telecoms companies will move any faster.
Anacom said it believes the measure will be sufficient to move things along faster, but it has not ruled out further rule changes, should it prove unsuccessful.
“In a scenario in which the auction is extended further, Anacom may consider other options, including disallowing the use of the minimum 1% and 3% increments that bidders can indicate in their bids,” it said.
This would force the companies to offer more for the spectrum in each bidding round.
Total bids after day 99 were at €318.8 million, which is not significantly higher than the €195.5 million reserve price, particularly when the many hundreds of bidding rounds that have come and gone are taken into account.
Portugal’s operators – Vodafone, Meo and Nos – are furious over the 5G licensing process because they think that the auction conditions are designed to give a new market entrant an unfair advantage.
Anacom tinkered with the conditions attached to the 900 MHz and 1800 MHz frequencies it reserved for a new player last year, addressing some of their concerns on pricing structures, roaming requirements and coverage, but it was not enough to prevent the big telecoms players from complaining. It certainly looks like Portugal’s big three are now making life difficult for the regulator in revenge. 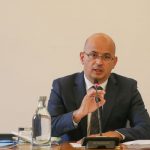 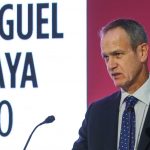 BCP share target up 30% after positive resultsBanks, News
This website uses cookies for a better browsing experience, in continuing browsing you're accepting their use. Read More