This hotel, which conjures a mixture of late 19th century Classical opulence and early 20th century Belle Epoque splendour is located right in the heart of the city’s downtown, boasts 85 rooms, 10 of which are luxury suites and a Vogue Café.

The Fladgate Partnership, which has owned the hotel since 2016, describes it as a “jewel” and it’s not hard to see why. Its stylish and luxury interior has been carefully restored, its marble floors and walls polished to restore the hotel’s sophisticated refinement.

Founded in 1951, the goal of this restoration was to recover the original configuration designed by architect Rogério de Azevedo, considered one of the pioneers of modernism in Porto. The task was handed to local architect António Teixeira Lopes, a student of the original author.

Adrian Bridge, CEO of The Fladgate Partnership said, “The Infante Sagres is part of Porto’s history. Apart from being the first five-star hotel in the city, it is located in Porto’s heart and has seen its development over the past 60 years.

“Today it is in the centre of a bustling dynamic energy and can offer visitors a refined luxury experience as well as the new Vogue Café, a space that combines the timeless elegance of the Vogue brand with the distinct charm of Infante Sagres”. 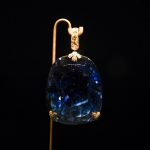 Swiss jewellery group opens in PortugalNews
Level Eight takes off in styleNews
This website uses cookies for a better browsing experience, in continuing browsing you're accepting their use. Read More