BBVA Seguros up for sale

The majority share in the Spanish insurance giant BBVA Seguros which has a strong footprint in Portugal is up for sale.

So far there have been no takers, but the German Munich-based company Allianz is rumoured to be a likely candidate.
Insiders had suggested that the sale should have been completed by March this year, but to date no binding offer has been made for the majority capital share in BBVA Seguros.
According to El Confidential there are three multinational insurers which have expressed an interest in the business – Allianz, Liberty and Generali but none have advanced with a concrete offer.
Sources quizzed by the Spanish daily have suggested that Allianz is the most probable front runner to strike a deal for the company valued at €2Bn in a scenario in which BBVA would sell more than 50% of its position.
The German financial group, after having received €936 million to sever its relationship with the Santander group, has the “financial clout” to carry the purchase and needs a sales outlet for its products.
With the purchase of Tranquilidade and AdvanceCare in Portugal for €600 million, Generali is now unlikely to be interested in the purchase of BBVA Seguros.
Liberty, which is currently in the process of relocating its Portugal, Ireland and Spain business to new offices in Madrid is also not likely to make a bid.
The possible contenders who are definitely out of the running include Mapfre which has agreements with Santander and Bankia.
And without expressing any reason why, BBVA Re, the company’s reinsurance arm, has just moved its headquarters from Ireland, where it had been since 2000, to Spain.
BBVA is the 13th largest insurance group on the Iberian peninsula and the 11th in Spain with €1.6Bn in premiums paid out in 2018. 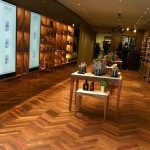 Portuguese perfumer aims to put scents on the mapNews 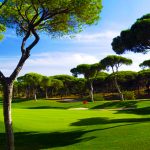 Ladies European Tour Qualifying School 2019 to be held in VilamouraNews
This website uses cookies for a better browsing experience, in continuing browsing you're accepting their use. Read More