COVID-19: Half of Portugal’s hotels to close this week

The president of Portugal’s Hotel Association says that at least 50% of the country’s hotels will likely close from this week.

The AHP’s Raúl Martins estimated on Friday that the hotels would be forced to close because of a lack of tourists caused by the coronavirus epidemic with an expected fall in revenue turnover of around 30% by the end of the year.
“Between April and June, turnover probably will fall to around 20% of what we’d usually expect, which by the end of the year will represent a fall of 30% in revenues, a situation made worse by the reduction in air traffic,” he said in an interview with the Lusa news agency.
According to Martins, hotels will be on the “limit of financial viability” juggling a difficult situation because of a reduction in business and room occupation rates.
Raul Martins says that more recently the situation has “got substantially worse” with many hotels closing and those which have remained open have reported an occupation rate below 15%.
“It’s a situation that we foresee will remain until the end of the pandemic which, if we look at China, will last three months. Only at the end of May will we begin to see a reversal in this trend and we won’t be able to reopen hotels before July” he said.
Despite not all of the latest data being available, the AHP estimates that by the end of this week around 50% of hotels will have closed, particularly in Lisbon and Porto.
Those hotels that have remained open have been adopting exceptional measures for at least the past two weeks, such as stepping up on cleaning, restricting the opening hours and capacity of restaurants and bars, and checking the temperatures of staff and guests.
In the case of a client suspected of having contracted the disease, they are confined to their room until an ambulance arrives according to the guidelines from the Directorate-General of Health (DGSI). To date only one infected hotel guest has been confirmed and that was in a hotel on the island of Madeira.
As to the measures adopted by the Government to slow the progression of the coronavirus, Raul Martins says that these will “allow companies to remain economically viable”.
He says that all financial support from the Government and banks in terms of cash injections will be “very important”.
Martins added that the sector was already used to dealing with crises such as the financial one between 2008 and 2012, and expressed the hope that this one, despite being tough and damaging, would not last too long. 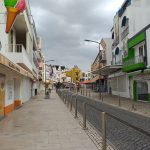 Government suspends termination of rental contractsNews
This website uses cookies for a better browsing experience, in continuing browsing you're accepting their use. Read More