The rich historic and cultural ties between Portugal and the US, the growth of transatlantic trade, the continued cooperation on a new purpose for Lajes airbase as a platform for ocean economy, space research and North and South Atlantic security were highlighted by Portugal’s foreign minister Augusto Santos Silva in Lisbon on Thursday.

The minister was speaking at a gala dinner which delivered the annual American Chamber of Commerce in Portugal (AmCham) Tributes which not only presented awards for entities and companies that represent and epitomise the strong bi-lateral trade relationship between the two counties in fields such as innovation, artificial intelligence, technology, financial services and renewable energy, but also was the crowning event of a year which celebrated the chamber’s 70th anniversary.
Highlighting the bi-lateral relationship between the United States and Portugal, the foreign minister talked about the depth of the relationship at different levels. A relationship which spans 250 years – Portugal was among the first nations to recognise the United States of America as an independent state after the Declaration of Independence in 1776.
“It has always been a very rich relationship since Independence until today, particularly in terms of the Azores which in the words of Franklin Roosevelt pointed out that the ‘most westerly islands of the archipelago are closer to the United States than Hawaii is to its own west coast’”.
The foreign minister made reference to the over 1 million luso descendants who live in the United States of whom hundreds have public roles in US administration and governance, in various senates and municipalities. Those who occupy judicial roles, as well as ties between families who meet, and their importance for tourism and travel, while both TAP and US airlines creating more and more air routes between Portuguese destinations and US cities.
Augusto Santos Silva then mentioned the importance of the Alliance, which in addition to the two countries being neighbours and friends, Portugal and the US are allies, both in good and bad moments such as the entry and exit from Afghanistan. “We entered together and left together”, an alliance in NATO, but also through bi-lateral agreements and the Permanent Bilateral Commission which takes place in Washington, DC and includes issues relating to the US military Lajes Air Base on Terceira Island, also environmental, labor and infrastructure issues, as well the cooperation with the Azores in areas such as Education and Health.
Then there is a contemporary aspect to the relationship based on commercial and trade exchanges; technological cooperation involving companies, universities and research centres which have all been very important for Portugal’s recent modernisation.
This included José Mariano Gago’s (a humanist, thinker, academic, minister and scientist) contribution to creating a scientific programme with educational establishments such as the Harvard Medical School, MIT and the University of Texas in Houston, which have permitted universities and research centres in Portugal to make a qualitative leap in those areas at which the US excels, such as innovation in technology which has helped Portuguese companies.
The Portuguese foreign minister also referred to the huge opportunities and responsibilities that lay ahead. “We are very proud that during the Portuguese presidency of the European Council in the first half of 2021, we had a place at the EU-USA summit, which we had not had since 2014, the last time that we organised the summit”.
Portugal also received the US Secretary of Inland Security, Anthony J. Blinken, high ranking officials from the judiciary and the US Trade Secretary, Katherine Tai and the Treasury Secretary, Janet Yellen who took part in meetings.
“This intensification in the relationship between the United States and European Union have increased despite a change in administration and without there ever being any doubt from Portugal’s side about its geopolitical position and geo-strategic interests whatever the government in Portugal”, said Augusto Santos Silva.
Portugal, he said, has also bolstered its strategic defences in recent months with new functions and purposes for the Lajes air base on the island of Terceira as a large climate, ocean, land and space research platform involving both countries, as well as an Atlantic Centre, a multinational initiative led by Portugal dealing with security analysis, dialogue, and capacity building focusing on the whole of the Atlantic.
The two countries also share regular consultations on African and Latin American affairs on which Portugal can bring experience and knowledge to the table. “I am sure that the US will never forget that from 2020, and from an EU perspective, the focus moved away from Asia towards China and the US drew attention for the need to deepen relations with India and the Indo-Pacific region becoming increasingly geo-politically important to the EU, US and UK.

The US Chargé dAffaires in Lisbon, Kirstin M. Kane (pictured), praised Portugal and the Chamber of Commerce for exemplifying fortitude and adaptability throughout the pandemic, persistently finding ways to excel in business and also to do good in helping those in times of need.

Kirstin Kane said that while there are many challenges and crises facing the world today, not only the pandemic, but also climate change, migration, cybercrime and others, one of the biggest challenges was the threat to democracy.
“It is absolutely clear in the 21st century that there is a battle between the utility of democracies versus autocracies. We must show people that democracy is the better and the only functional way together.”
Mentioning the current “excitement in Portugal with the snap elections in January” Kane said the Portuguese were often hardest on themselves and that the country’s nearly 50-year multi-party democracy has been “quite impressive”, particularly through the pandemic where Portugal has the highest vaccination rate in the world.
“Your own hero, Admiral Gouveia e Melo, when asked recently if he would again take up the reins of leading a Taskforce against Covid, he resisted his celebrity and an opportunity for more power, noting that in a democracy military commanders must never overstep the role of civil leaders”.
“It was such a poignant remark that it reminded me of George Washington who at the end of two terms, despite his popularity, refused to stay in power, stepped aside and paved the way for 245 years of democracy”.
Kane stressed that fair trade and commerce were inexorably linked to democracy, security and peace. “The Covid pandemic has shown us vividly the risks of not respecting science, scientists, journalists, civil society and transparency watchdogs when tackling global challenges”.
The President of AmCham, António Martins da Costa (pictured with the foreign minister) highlighted that trade between the US and Portugal had increased over the past five years and has never been better.
“Today the balance of trade is very much in Portugal’s favour. In fact, by 2018 the United States overtook the United Kingdom with a trade surplus of €1.8Bn which has continued since”, he said.
This trade surplus has been largely down an increase in Portuguese common metal exports including iron, steel, copper, zinc, lead and aluminium.
And even in the pandemic year, trade between Portugal and the US gained positive ground with an increase in exports to the US in Q1 of 2020, leading to the best balance of payments surplus compared to other leading trade partners, while Portugal cut imports from the UK by over 50% (-56.3%) while importing more from the United States. (+25%)
According to Portugal’s National Statistics Institute (INE), the US continued to be the fifth most important export client for Portugal in terms of goods and services in 2020, with a 5% share of the total, occupying 10th position for imports (1.8%) while between 2016-2020 there was an average annual growth rate in exports of 2.5% and 10.4% in imports. The balance of trade was favourable to Portugal with a surplus of €1.4Bn in 2020.
Various business opportunities between the two countries have been identified in various sectors, particularly health (EPI and innovative products), services linked to the digitalisation of the economy and the development of ecologically sustainable products and an increase in E-commerce.

At this year’s AmCham Tributes, the winners were: 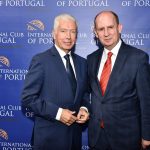 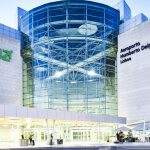