ARC Ratings has improved Portugal’s economic and investment rating from ‘stable’ to ‘positive’.

The rating was upped on Friday (15 November) because of the “evolution in the quality of Portugal’s sovereign debt” and its perspectives for attracting overseas investment.
Portugal’s rating remains at ‘BBB’ which is two investment grades above ‘junk’ or high-risk speculative investment status.
“ARC Rating has changed the outlook from positive to stable and confirms Portugal’s long-term ‘BBB’ rating as an issuer of national debt in national currency and in international currency” states the communique.
Normally an improvement in perspective comes before a rise in the rating of sovereign debt in the months that follow.
The rating agency explains that the improvement in outlook is down to a “continued improvement in the main indicators within the context of economic growth”.
ARC also highlights the contribution of investment as a component of GDP and the continued efforts to consolidate the budget.
ARC predicts that these budgetary efforts will continue in the short to medium-term and expects that the main policies will be maintained by the new government that won the elections in October 2019 given that the Prime Minister, António Costa and Finance Minister, Mário Centeno retain their respective positions.”
“The increased external resilience of the Portuguese economy and improvements in the profile of the financial sector are also seen as positive for credit risk” states the communiqué. 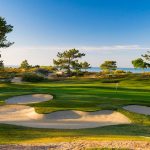 Troia Golf voted in Top 10 most ecological golf courses in the worldNews
This website uses cookies for a better browsing experience, in continuing browsing you're accepting their use. Read More